In May members of the Development Management Team braved the rain to install four planters along Knight’s Walk in order to trial a motorcycle barrier that looks lovely and smells nice too.

Over a year ago when we began conversations with residents about their priorities for Knight's Walk and put together the draft Residents' Brief, a key priority that was identified both from residents and neighbours of Knight's Walk was about finding a way to stop bikes and motorcycles from speeding through the quiet routes of the estate:

Des from Dally Henderson went about proposing a new landscaping approach for Knight's Walk that would make it more difficult for motorbikes to speed through and at the same time would also look nice in the peaceful, green outdoor spaces of the estate.

Shortly after it was raised, it became clear that this was an issue that needed to be addressed more urgently and since we were beginning to look at planting the garden of No.15 Knight's Walk with residents, an idea came about to test out barriers for motorcyclists using temporary wooden planters.

Waist height wooden planters, filled with beautiful flowers and herbs, located at key 'pinch points' along Knight's Walk would be a good way to test how and whether motorcyclists could be deterred from this dangerous shortcut. Looking at the proposed planting designs for the new development, we discussed and agreed with residents on four locations for the planters to go.

We also took this opportunity to introduce some of the history and archive conversations we have been having with residents. Over the past year, starting with a visit to the Lambeth Archives and followed by a regular exchange of stories and anecdotes for the Knight's Walk Memory Archive at No.15 we have gathered many wonderful moments shared on the estate. We agreed it would be nice to embed these stories in some way in the public spaces of Knight's Walk as this too was a priority set out in the Residents’ Brief.

At the end of May we braved the rain along with the friendly team of engineers from Campbell Reith and put together the four wooden planters, filling them with fresh compost and planting a range of colourful flowers and herbs. 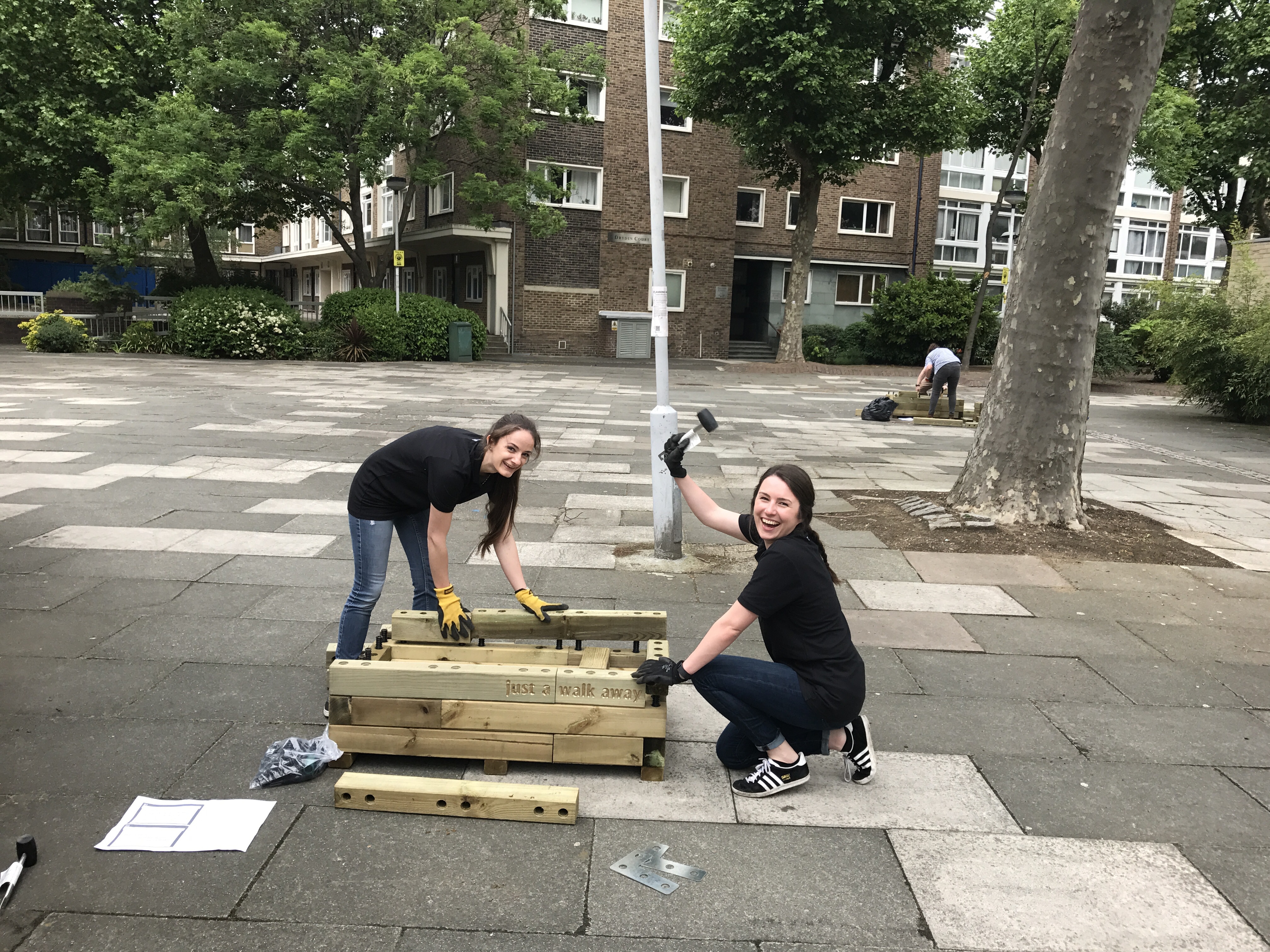 We received wonderful feedback from residents and neighbours alike, people loved the colour that the planters added to Knight's Walk, some residents recognised their stories engraved into the planters and others were delighted to take cuttings of rosemary for their cooking.

Some residents commented on a real difference around the area of their front doors feeling safer with the planters in place, others provided feedback that small adjustments in the location might work better. The planters were constructed temporarily on Knight's Walk and can be moved if required, this means that as time goes on we are able to gather feedback about which locations work best in stopping speeding motorcyclists and which don't work as well and use these beautiful, lovely smelling barriers to inform the new landscaping approach for Knight's Walk.